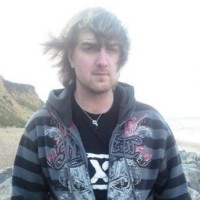 Phil Romeo (born May 1, 1988) is a British singer-songwriter with a taste for electric guitar and a theatrical flair. After failing his music GCSE, Phil still managed to gain entry to a musical college on the merit of his voice alone. Performing for several bands of varying genres, developing and honing his skills, Phil developed his abilities with the guitar and became a musician in his own right. Throughout his time in college Phil was introduced to life as a professional musician, when traveling to Germany on a college trip it was clear that Phil's down to earth nature made it easy for him to strike up a conversation even in the face of language barriers. Coming out of college Phil was met with the opportunity to join a metal band as lead vocalist. With a melodic sound underlying the more generic heavy sound the band quickly took off as a popular local band with a varying fan base. As time went on the band grew to a "make or break" stage and it was then after years of gigging and trying to develop their own niche in the genre that the band parted ways. Phil then went on as troubadour, playing acoustic gigs, performing at 'Rhythms of the World' and even dabbling in Function music. It was during the hiatus of his professional performing that Phil started up a series of "Open Mic and Jam Nights" at several pubs with much success, but this was not enough to fuel his personal career, Phil soon found himself in a rock band rehearsing his own music. After being approached by Isis Records he began compiling and recording his songs and resulting in the album "Colour of Madness". – Release date expected 17 Dec 2011.

There are no events to display